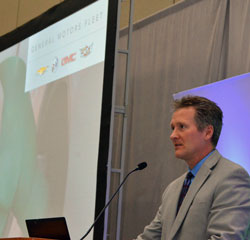 General Motors was very pleased to announce its expanded portfolio of B20-capable vehicles during the recent 14th National Biodiesel Conference in San Diego, taking the lead among auto makers with 20 trucks, cars and crossovers able to use 20% biodiesel.

“We listen to what our customers are asking us for,” said John Schwegman, GM Director of Commercial Product and Medium Duty Product. “Biodiesel means support for the local economy, especially the farming industry. It helps promote energy security.”

While GM has always been big in the diesel pickup space, Schwegman says they will be introducing three new B20-capable biodiesel cars and crossovers in the next 12 months. “The Cruze and the Malibu will both be starting production this year and then the Equinox shortly thereafter,” he said. “We know that some other OEMs are exiting this segment so it means more opportunity for us.”

Schwegman also talked about the road ahead for cutting carbon emissions with biodiesel during a session at the biodiesel conference: GM's John Schwegman on NBB17 OEM panel