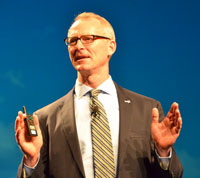 “Free enterprise can solve the problem of climate change,” said Inglis, who talked about the Energy and Enterprise Initiative he founded in 2012. RepublicEn, as it is called, is a nationwide public engagement campaign promoting conservative and free-enterprise solutions to energy and climate challenges. “I’m very happy with what I’m doing now because it gives me the opportunity to be about something that’s big enough to be about,” he said.

Learn more about RepublicEn and how conservatives can be part of the climate change solution in Inglis’ speech: Bob Inglis Speech