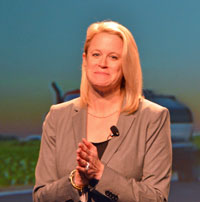 During an address to the membership at the 2016 National Biodiesel Conference, NBB Vice President of Federal Affairs Anne Steckel said they should take credit in the success of getting higher volumes under the RFS. “The fact that biodiesel was able to achieve most of its policy goals while others did not…is something we should really be proud of,” said Steckel. “I am proud to say that a two billion gallon standard moving forward is a long way away from the original RFS that flat lined biodiesel at 1.28 billion gallons.”

Steckel noted that they will continue to work toward a producers tax credit. “We were successful in winning a two year extension (of the blenders tax credit) through the remainder of this year,” she said. “However Congress…stopped just short of converting the tax credit into a producers incentive.” She says the fight will continue.

Cindy Zimmerman also interviewed Anne about the 2015 biodiesel numbers that came out earlier this week and how they show the need for a producers tax credit as more biodiesel is being imported into this country to take advantage of the blenders credit.

Listen to that interview here: Interview with Anne Steckel, NBB