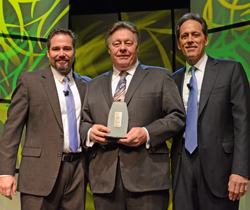 The mandate that inspired other states to put in their own biodiesel requirements and the man who helped start it all were recognized during the recent National Biodiesel Conference & Expo. Jerry Schoenfeld of Minneapolis-based Greater States Advisors picked up the Eye on Biodiesel Influence Award for his instrumental part in the development, passage, and defense of landmark biodiesel legislation in Minnesota after soybean growers came to him in 2000.

He admits he didn’t know much about biodiesel back then, as there was just 2 million gallons produced nationwide each year – a dramatic difference from today’s 1.8 BILLION gallons annually. Jerry said he had to work with a state legislature that was split between Republicans and Democrats and an Independent governor. The nation’s first 2 percent biodiesel standard for all diesel was finally made into law and served as a blueprint for other states’ mandates.

“In many ways, that measure worked, along with many others in your respective states,” Jerry told the group. He added that working with the split legislature and governor’s office taught him important lessons in legislative matters. “If you work hard and you keep at it, you will succeed. And secondly, you can’t always assume who your friends and who your enemies are, because on any given day, different politicians will be both!”