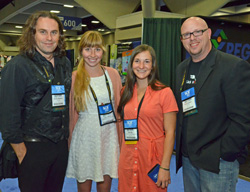 When Jeremy Wagner and Scott Roberts made the movie Gas Hole a couple of years ago, they had no idea the impact it would have. During the recent 2014 National Biodiesel Conference & Expo the co-directors/producers presented to attendees, showed an extended excerpt from the movie and did a little Q & A.

Chuck caught up with the team and they shared how they decided a film about the oil industry was their goal and what research it took to accomplish such an endeavor.

Scott said the idea come to them “when the gas prices hit an all-time high. At the time I think it was only $3.25, it was unheard of at the time. We saw an article in a newspaper written by a gentlemen who remembered seeing a vehicle back in the 50’s that he was told got a 100 mph. What happened to that technology and why aren’t we using it?”

They knew they wanted to do a documentary together, but hadn’t decided on a topic. After this discovery they hunted down the man from the article and the rest is history.

“As we started to learn about the history of oil and what happened going back to standard oil. How that became a giant monopoly and then broken up and how it moved us into the 70’s and then we had the oil embargo. The story is so enormous and fascinating we kept running in to these things that you don’t really think about or know unless you have researched it,” Jeremy said. He continued by saying, “We started researching alternative fuels and seeing what was the most viable thing and we came across biodiesel and what was happening in that industry.”

The duo share that their message to viewers is to explain this concept that has been made very complex, when it shouldn’t be. Gas Hole presents the idea that the solutions to our oil dependency is relatively simple.

“We hope through the film we can open people’s eyes and make them think about things they have never thought about before and takeaway all the great things in history that have been accomplished. It took hard work and determination, we are a great country – we have great innovators. This is a perfect example being here at this conference and seeing the people that are doing just that.” added Scott.

If you are interested in purchasing Gas Hole, visit GasHoleMovie.com. It is also available on iTunes, Netflix, Amazon and basically all the major outlets.