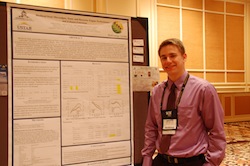 What do Alex McCurdy, Michael Morgan and Robert Willis have in common? They all work in the same lab at Utah State University (USU) and are working on three integrated pieces of biodiesel research. They are members of Next Generation Scientists for Biodiesel, and work in Lance Seefeldt’s lab, a professor in USU’s Department of Chemistry and Biochemistry and a principal faculty mentor on the interdisciplinary project. 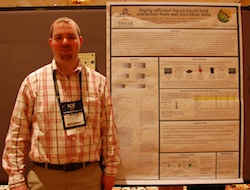 Here are some fun facts: McCurdy, Morgan and Willis were all on the team that set a land speed record with a race car design all their own and it ran on 100 percent biodiesel developed by the team. The team is also perfecting the production of fuel using yeast and bacterial platforms and also developing fuel from cheese
waste, carbon dioxide and the sun using microalgae platforms.

Alex noted that the research team has recently succeeded in producing quantities of fuels from all of these sources that have superior properties in test engines, comparing favorably to biodiesel produced from soybeans. This research was featured by the three students during the poster session at the National Biodiesel Board Conference & Expo in Las Vegas.

Listen to an overview of Alex’s research: Biodiesel from Microalgae, Yeast & Bacteria

Listen to an overview of Michael’s research (he is the dragster driver): Dragster Performs on Biodiesel