The biodiesel industry has many to thank for efforts that have lead to greater adoption and support of biodiesel. One area that has been an early adopter is the Big Apple – New York City. Under the leadership of John D. Maniscalco, the CEO of the New York Oil Heating Association, New York City recently passed landmark registration: beginning in October 2012, all heating 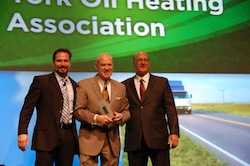 oil sold in the city must contain at least two percent biodiesel.

This cleaner burning, domestic fuel blend known as Bioheat® will replace up to 20 million gallons of petroleum a year. The efforts of Maniscalco and the support provided by the New York Oil Heating Association made this unprecedented legislation possible.

With the help of NBB and its dedicated Bioheat program, there is currently a Bioheat consumer education campaign running in the Big Apple. Maniscalco hopes this will increase awareness and support of biodiesel. His next two goals for this year are to increase the Bioheat legislation to the entire state of New York, as well as increase the Bioheat biodiesel blend of 2 percent to at least 5 percent.

Maniscalco is also giving back to the community as the aftermath of Hurricane Sandy continues. He is sponsoring a “NYC Proud 2B2 Renewable Warmup” campaign along with Midwest biodiesel producers. Through the campaign the biodiesel industry is offering a grant to three charities – $15,000, $10,000, $5,000 – but you must vote now to determine who will win.

Listen to my interview with John here: Next Steps for Bioheat in the Big Apple