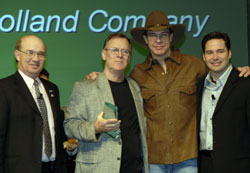 Each year the National Biodiesel Board bestows the “Eye on Biodiesel” awards, designed to recognize individuals and groups who have advanced the board’s mission of public education and industry growth. The awards were presented by NBB Chairman Darryl Brinkmann (left) and NBB CEO Joe Jobe (right). Michael Peterson is pictured in the hat. Award for:

Innovation – Gene Hemphill/New Holland Co., Manager North American Industry Affairs.
New Holland in 2006 approved the use of 20 percent biodiesel (B20) in all of its equipment using New Holland engines. It is the first Original Equipment Manufacturer (OEM) to announce full support of B20 in all of the diesel engines that it produces. Hemphill is a big reason for New Holland’s support; he was advocating its use in their equipment almost a decade ago. Also, in 2003, New Holland was the first large farm equipment company to join the Biodiesel Alliance that connects the widespread support base for biodiesel. New Holland also awarded use of its tractors to the nation’s two top recruiters of the Biodiesel Alliance.

Listen to the presentation with Gene here:

Domestic Fuel coverage of the
National Biodiesel Conference sponsored by