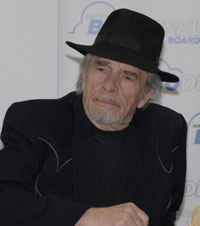 One of the newest stars to advocate biodiesel is Merle Haggard. The legendary country star performed for attendees at this year’s Conference after meeting with the press and the board of the National Biodiesel Board.

Before coming to the auditorium where he performed though his bus got a fill up with biodiesel. During the press conference Merle said that he was learning about the benefits of biodiesel. When asked what attracted him to the renewable fuel source his answer was “the smell.” 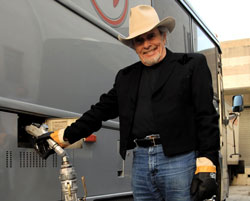 As someone who is in a diesel powered bus a lot he says he really doesn’t like the smell of burning diesel but heard that biodiesel smelled different and that was what got him interested. He also said that he’s happy for how the development of biodiesel is helping American farmers. (Thanks to Brian Kanof for the picture of Merle filling up)

I recorded the full press conference which you can listen to here: