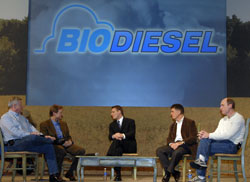 At this morning’s general session a panel discussion was held that featured U. S. Representatives, Collin Peterson (D-MN), Kenny Hulshof (R-MO), Thaddeus McCotter (R-MI) and Dave Wheldon (R-FL). These are also the members of The Second Amendments, the band that played at half time during the Super Bowl party yesterday here at the National Biodiesel Conference.

They talked about their vision of our nation’s energy future. The moderator for the session was Gene Gebolys, World Energy Alternatives and NBB Regulatory Chair.

I recorded the session for you in its entirety:

During the morning general session the NBB CEO, Joe Jobe gave a speech in which he outlines several key focus areas for the organization. I recorded his speech and you can listen to it here:

Just in case you’d like to read a transcript of his remarks you can find it with this link: Joe Jobe Speech (Word Document)