There is a growing number of women who are forging paths and leading the way in innovative biodiesel research. Two such women are Megan Hums, a student at Drexel University, and Jennifer Greenstein, a student at North Carolina State University. They are both members of the Next Generation Scientists for Biodiesel program and they both presented posters during this year’s National Biodiesel Conference & Expo. I spent some time with both young women to learn about how they became interested in biodiesel/bioenergy. These are some amazing young ladies! 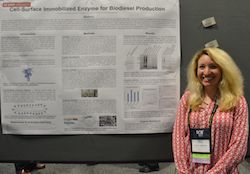 Jennifer Greenstein used to work in bioethanol and she says biofuels is something she can really get behind. As such, she headed to North Carolina State University to pursue her PhD and while there began working for Piedmont Biofuels, a biodiesel producer. (She will be graduating soon. Contact her here.)

For her research, Jennifer is working on developing lipases, which are a catalyst to make biodiesel. She is looking at an improved production system for making the lipases and immobilizing them. So in other words, she is looking for a way to express the lipases on the surface of the bacteria rather than intracellularly. The cool thing is that the process she is looking at will use an enzyme to replace chemicals in the production process. To learn more about her research, listen to my interview with Jennifer Greenstein here: Interview with Jennifer Greenstein

After Megan graduated with her undergrad degree she said she felt she still had more to learn. With her interest in sustainability and biofuels she found a project at Drexel University (She’s in her fifth year of her PhD program and graduating soon. Contact her here.) that interested her using waste greases for biodiesel production. She has been involved with this project and it was the focus on her poster.

Megan is looking at the environmental impact of using low quality greases, or kitchen waste greases, which have gone down the sink, to produce biodiesel using nonconventional biodiesel conversion. She then takes the whole process and applies environmental impacts to it through a lifecycle assessment and tries to figure out the footprint of production. To learn more, listen to my interview with Megan Hums here: Interview with Megan Hums