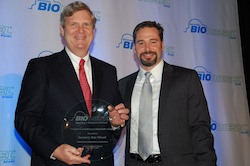 “I’ve witnessed the beginning of a rural renaissance that is remarkable, and you, sir, have presided over it,” said Joe Jobe, CEO of the National Biodiesel Board. “You went to bat for us in the successful expansion of the RFS, and for an issue like ours to go all the way to the top is extraordinary. We can’t thank you enough for your leadership.”

Rather than a typical award, this one was embossed on a glass plate, apropos for the leader of American agriculture.

“You have the power to make us more energy secure, and still create enough food and fiber for the world. That’s an amazing opportunity worth fighting for,” said Vilsack. “You also have the ability to respond as a generation to climate change. You’ve got to keep up the fight because the stakes are extraordinarily high.”