The beginning of October has brought at least 10 Pakistani attacks on oil tankers carrying fuel for NATO vehicles in Afghanistan. The NY Times reported today that fuel convoys are “sitting ducks” and as a result, have come under increasing attack. In response, U.S. Rep. Gabrielle Giffords came out in support of bipartisan leaders of the House Armed Services Committee for urging Secretary of Defense Robert M. Gates to study new ways of reducing energy use.

The U.S. government is the largest user of fuel in the country and has publicly committed to adopting the use of renewable fuels. Just this year, several test flights have already taken place using “bio” jet fuel. In addition, the military has acknowledged the vulnerability of its troops due to their dependence on fossil fuels, and last month, Biodiesel Industries announced the next phase in development of its system to create biodiesel right on military bases. This system could be built in military camps around the globe lessening the danger of U.S. troops who would no longer have to transport huge amounts of fossil fuels to and from its camps on a daily basis. “Transporting fuel for operational use is one of the most dangerous assignments for our men and women serving in Afghanistan,” said Giffords, a member of the Armed Services Committee. “We must take immediate steps to find ways of reducing fuel use as a way of safeguarding our troops.”

“Our enemies know of our reliance on oil and they are using it to their advantage, and as a result, thousands of service members are dedicated to securing vulnerable supply lines instead of fighting the terrorists who threaten our way of life,” continued Giffords who has introduced legislation to address the issue.

Giffords’ bill, the Department of Defense Energy Security Act, would help reduce the Pentagon’s $20 billion annual fuel bill through a number of specific steps. Among them is accelerating the production of biofuels for aviation and promoting large-scale renewable energy projects at defense facilities. These steps would help make it safer for our troops.

“We believe there are ample opportunities and technological solutions to reduce our energy footprint in theater which will reduce the logistical and security burdens on our troops,” the two congressmen wrote.

However, biodiesel is not the only option the military has to reduce its energy use. The Times also reported today that a Marine company that recently arrived in Afghanistan was the first to take renewable technology into a battle zone. The Marines brought portable solar panels that fold up into boxes, energy-conserving lights, solar tent shields that provide shade and electricity, solar chargers for computers and communications equipment. 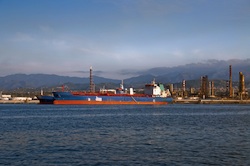 Giffords said her bill will address energy supply and use at the Defense Department both in theater and at home. She said it decreases consumption by integrating hybrid and high efficiency technology into both the tactical and non-tactical vehicle fleet and would replace the vast fleet of sedans, buses and trucks with hybrid and electric alternatives that are currently available.

The bill has four broad goals: reduce the reliance on oil in the battlefield; task the Department to plan holistically for their energy use; decrease electricity consumption at facilities around the world; and increase the self-reliance of bases by increasing the development of on-site renewable electricity.

“My legislation would provide a comprehensive blueprint that would guide the military’s research, development and use of sustainable energy sources. We cannot continue to put the lives of our troops at risk by exposing them to danger in slow-moving, highly visible fuel convoys,” concluded Giffords.